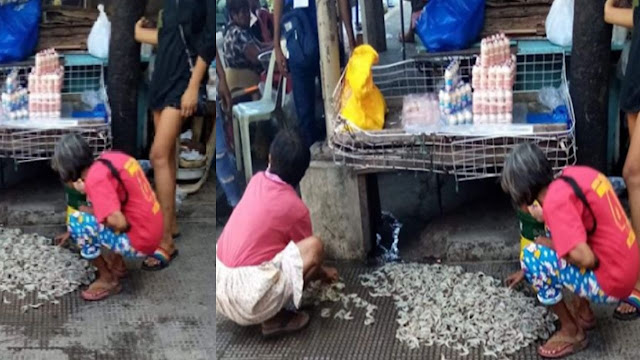 Many people nowadays are experiencing poverty because of C0VID-19 pand3mic. The government also decided to declare a lockdown in the country as a measure to prevent the virus from spreading. Because of this, many people experience hardships in life as they can’t able to go to work and continue their business and means of living. The cash assistance of the government is also not enough for the whole community quarantine.

One of these is the situation of a grandmother from Malingas, Dagupan. Even she was already old, she still selling shrimp in the marketplace so she can support the everyday needs of her family.

But sadly, the grandmother was caught by heartless barangay tanod in their community. Instead of reprimanding the old woman, they throw the shrimp that she was selling.

According to a concerned netizen who witnessed what happened, the old woman was selling the shrimp in the sidewalk, carrying a bucket and tray that is filled with shrimp. The barangay officials told the old woman that she was not allowed to sell shrimp in the said area because she doesn’t have a stall there.

The netizen wrote on the caption of the post:

In the photos, it can be seen that many people witnessed what happened but none of them help the old woman while she was picking up the shrimp. Later on, a fellow vendor helps the old woman to pick up her goods.

Here are some comments from the netizens: